Start a Wiki
Bernie was a donkey named after Bernie Sanders that was tamed by Pewds in episode 20. He was a successor of Joergen and Joergen II.

Due to Felix's words, Bernie was spotted by him in very early episodes. After Joergen II died in a minecart accident, Felix thought that he didn't deserve a horse, and that he should tame someone else to ride. While venturing with Sven to find a different kind of steed, he found Bernie.

Felix fed him sixteen pieces of wheat, unaware that donkeys are tamed the same way horses are tamed. After running out of wheat, he sat on Bernie, and the donkey was tamed. When Felix went to get Bernie a saddle, he encountered five pillagers rather close to his home. He killed all of them before meeting back up with Bernie and officially naming him, saying that he's now part of the bro gang. Felix then brought him home and showed him the graves of Joergen, Joergen 2, and Water Sheep, while also introducing him to IKEA BIRD.

Felix attempted to put some horse armor on Bernie before going on an adventure, but it wasn't possible. (Though even Felix doubted it would work.) Felix and Bernie went through his Nether Portal, but on the other side, Bernie glitched into the side of it and suffocated, just like Joergen. Thankfully, Pewds managed to get him out before he could suffer the same fate Joergen did, though Bernie only had 5 hit points left. In the middle of formally introducing him to the Nether, Felix realized he forgot wheat to keep Bernie's health up, so he went back to his house, grabbed 29 pieces of it, and went back to the Nether, using 11 of them to bring Bernie's health back to 28 hit points. After finding another Nether portal, Felix expanded it in an attempt to keep history from repeating itself, and they both went through. Bernie suffocated on the other side again, but Felix made sure he survived.

In a "mood for killing", Felix triggered a raid in the village they had travelled to. He rode Bernie into battle and they killed several zombies and spiders, making Felix wonder why he waited until night to go on an epic adventure with him. After defeating the zombies and spiders, Felix told Bernie that no one messes with them before realizing that they haven't even started fighting the actual raiders. After finding them, Felix killed them quickly, though Bernie was shot once. Once the first wave of raiders were defeated, Felix brought Bernie's health back up just before the second wave started. Bernie was shot several more times, but his mobility helped Felix take out the Pillagers before they could do further damage. As the third wave began, Felix once again brought Bernie's health up while also saying he was doing great. The third wave came with a ravager, so Felix rode Bernie a fair distance away from him as he gunned it down with a bow and arrows, keeping the gap between them fairly big.

After defeating them once again, the fourth wave of the raid began. Felix was so busy fighting the raiders that he forgot to being Bernie's health back up. While dealing with two Pillagers that were right next to each other, Felix suddenly fell off as the pillagers shot at them, and when he turned to the right he saw Bernie's Saddle, surrounded in a cloud of rising smoke, revealing that Bernie had been shot to the heart by the Pillagers, and died. Outraged, Felix went on a rampage and destroyed both Pillagers to avenge Bernie. The raid ended with Felix being victorious, but he felt he couldn't celebrate with the Villagers without Bernie.

Felix returned to his house and built a grave out of dirt for Bernie, putting the iron horse armor he tried to put on him earlier in the item frame, behind the grave of Joergen I, claiming that Bernie was poor and could not afford a grave made of ores like Joergen, Joergen II and Water Sheep.

Note: Bernie #1 had not been given a voice, so the following are quotes of PewDiePie talking to, or about him. 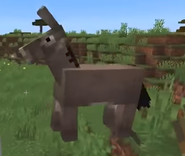 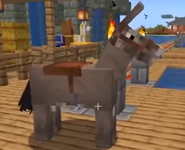 Bernie when he came to Pewds' house.

Bernie in the Raid

Bernie Memorial
Add a photo to this gallery
Retrieved from "https://pewdiepie.fandom.com/wiki/Bernie?oldid=70424"
Community content is available under CC-BY-SA unless otherwise noted.