Chopnese is a language that is spoken and created by PewDie when he is holding a knife-like weapon. Bros speculate that Chop Chop Master Onion is the master of Chopnese. Chopnese also inspired the Chop Chop Chop t-shirt.

Chopnese was created in the Let's Play Afraid of Monsters. Chopnese has been used in many of PewDiePie's videos, including Nosferatu: The Wrath of Malachi, Amnesia: The Dark Descent, Amnesia Custom Stories, Ib, and many more. 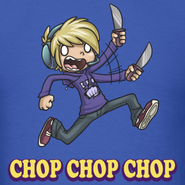 The Chop Chop Chop t-shirt which was inspired by Chopnese

PewDiePie using Chopnese in Nosferatu: The Wrath of Malachi
Add a photo to this gallery
Retrieved from "https://pewdiepie.fandom.com/wiki/Chopnese?oldid=40330"
Community content is available under CC-BY-SA unless otherwise noted.