Start a Wiki
David Hoover is the main character of the RPG horror adventure game, The Crooked Man, first played by PewDiePie on March 18, 2013. 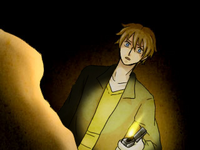 David dreams of becoming a test pilot, and wants to pursue that future. Unfortunately, he finds out he is colorblind, and this is one of the criteria that automatically disqualifies him from having any chance of acceptance in the school. However, David stubbornly refuses to accept his dream is over, and fakes the entrance exam results to be able to pass into flight school. His fellow colleagues and professors do not find out he has been lying to them until near graduation. In one instant, David's integrity in the eyes of others takes a harsh plummet, and he withdraws from flight school for good.

During the same period in his life, his mother begins to suffer from a severe mental illness, and has lapses in memory in which she completely forgets David is her son, and acts out violently towards him. One night, he can't take another one of her ferocious fits again, and in a state of having reached his capacity for patience, David almost chokes his mother to death with his bare hands. His friend, Paul, walks in on the incident and stops David in time. David's mother is sent to the hospital, and saved. However, David finds out his mother has a tumor in her brain, which is what caused her memory impairment and violent outbursts.

Sometime after this, David suffers another blow in his personal life when his girlfriend, Shirley, breaks up with him. She is tired of his lack of ability to make proper changes in his life, and leaves him with the last word that all he has is "kindness." With the loss of both his mother and girlfriend, Paul and his wife, Marion, who is also part of David's small group of friends, try to help him move on by finding him a small place to live on his own. David settles into an apartment complex's room, but has trouble with the place right from the first night in.

A series of ghostly and paranormal events in the apartment room beckon David's attention. David learns from some paper scraps the former tenant left behind that he, too, was also pursuing a dream in school to be a lawyer, and the man's girlfriend also left him, which David feels is similar to his own situation. David becomes fixated on finding and meeting the man, and goes on a journey to seek him out.

Retrieved from "https://pewdiepie.fandom.com/wiki/David_Hoover_(character)?oldid=70436"
Community content is available under CC-BY-SA unless otherwise noted.