Edgar Allan Pug is PewDiePie's third pet dog (after Ynk and Maya), and second pug. He is named after poet Edgar Allan Poe, and PewDiePie jokingly says his full name is "Edgar Allan Pug" because of his breed.

Edgar was introduced in an episode of Fridays with PewDiePie uploaded on October 13, 2013, entitled MA NEW DOGE, as well as a video called MEET EDGAR! on Marzia's channel. He is 8 years old, but is larger than Maya (who is 15 years old), and has a coat of short, black fur. PewDiePie describes him as a nervous dog in general and demands a lot of attention, but he was notably very calm in the videos he has appeared in so far (although he has frequently attempted to sabotage PewDiePie's equipment during his recording). When talking to Edgar, PewDiePie gives him a high-pitched voice and a sarcastic personality.

He also mentioned in Cold Ones that Edgar annoys him very much, because "he pees everywhere".

Before he met PewDiePie and Marzia's other pug, Maya, PewDiePie stated that he will be her "new brother"[1] and "brother from another mother"[2]. They finally met in PUG MEETING! , and Edgar fell in love at once and would not leave her alone for a minute.

Edgar often walks in on PewDiePie filming. He is also known to fart which, PewDiePie often commments on. 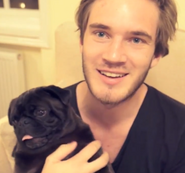 PewDiePie with Maya and Edgar.

Community content is available under CC-BY-SA unless otherwise noted.