Ha ha! You're approaching me? - Felix, to the Ender Dragon, mocking him.

The Ender Dragon was the ruler of the End and the main antagonist of Season 1 in Pewdiepie's MINECRAFT EPIC. She debuted in Part 29 of the Let’s play at the end of the episode.

At an unknown point in time, The Ender Dragon appeared in The End dimension and transformed what is now known as The End (formerly the Sky Dimension) from a collection of lush floating islands inhabited by common overworld animals and other dragons into a barren, lifeless wasteland made of Coral-Like End Stone and strange Chorus trees.

When a civilization arrives, they attempted to slay The Ender Dragon but were unsuccessful, even with enchanted diamond and iron armor and swords. They soon surrendered and the Ender Dragon enslaved and forced to build the obsidian pillars with end crystals to heal her with the obsidian they possibly tried to escape via the nether portal with. The enslaved civilization had used up their food supply at some point and had to rely on the chorus fruit as their main food source, which had a side effect of randomly teleporting the consumer to a random location, which will eventually start to be absorbed into anyone who overdoses on it. After many generations, the civilization had evolved to grow taller to pick chorus fruits and had become nearly mindless husks roaming and teleporting around the barren islands aimlessly.

PewDiePie discovers Enderman in part 4, attacks him and gets killed by it.

In Episode 5, PewDiePie discovers an Enderman in a desert. He was confused by its presence and simply moved on.

In Episode 18, Pewdiepie discovered the stronghold in which the End Portal was contained. When he found the portal, he realized that he does not have enough Eyes of Ender to activate the portal so he decided to create a Nether Portal leading to the portal room as a shortcut.

At the end of Episode 29, after King PeePee PooPoo's betrayal, she is seen menacingly flying in the End, absorbing the healing beams of the end crystals.

In Episode 30, Pewdiepie fought Ender Dragon, he first destroyed most of the end crystals with his trident and fired Ikea bird arrows at The Ender Dragon before being launched into the air and dying from fall damage. He came back to the end with PeePee PooPoo to reclaim his items but he soon fell off the obsidian platform with PeePee PooPoo and both died. He then came back for round 3, this time bringing an inventory full of boats, beds, snow and pumpkins.

With his utmost valiance and perseverance, after 2 failed attempts and many bed bombs, the Dragon was on only 1 health, Pewdipie shot one of Ikea Birds Arrows into the Ender Dragon's heart, piercing it through. It exploded into a hail of XP (enough to land Pewdiepie on level 69) and opening the exit portal.

The dragon is in the boat! (catcortez)

A meme fan art of Pewds urging the dragon to GET IN THE BOAT! (QuicheKolgate) 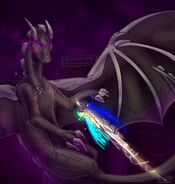 The fatal blow for the Ender Dragon (Grumbing)
Add a photo to this gallery
Retrieved from "https://pewdiepie.fandom.com/wiki/Ender_Dragon?oldid=74339"
Community content is available under CC-BY-SA unless otherwise noted.