Feigi was the first real antagonist of MINECRAFT EPIC Season 2. He is a chicken that PewDiePie randomly kidnapped for his new home pet in Episode 33 after he left his base with Sven and the others. He was accidentally turned into a giant goose by Felix and later appeared to be killed in the battle. He has a twin brother that bears the same name as him.

According to Felix, Feigi is the same chicken found in Episode 31, Cheep-Cheep-Cheep. In this episode, a lone chicken was found floating in the middle of the ocean. Felix started to question this chicken, asking him if he had been sent by Water Sheep, when it began to rain. Taking the chicken as a sign from Water Sheep, Felix decided to take the bird with him in search of glaciers, calling him Water Chicken. Later in the episode, when he got back from excursion mining packed ice, Cheep-Cheep-Cheep was gone. Water Sheep likely recaptured him in Pewds' absence, and was going to plant him in the alias of Feigi. Pewds returned home without him. In Episode 33, Felix had returned to his Summer Home to repent after causing the death of Sven's BF. There, he was greeted by a random chicken with the nametag "Feigi" equipped. Felix claimed that this was the same chicken from Episode 31, and wondered if he had been sent by Water Sheep to make him feel better. Feigi showed Felix many acts of kindness, but each one was turned down and Feigi was only tortured. Still, the chicken found a way to make every situation better, and Felix became infuriated as he was unable to break Feigi through numerous means of torture and to attempt to find out who "he was working for."

Main article: Feigi War
Boss Feigi is the stronger variant of Feigi that appears at the end. Boss Feigi is a chicken that shoots out explosive "Steves" and tries to peck at Pewds.

In episode 33, Felix returns to the 2nd home he built many episodes ago due to the loss of Sven's Boyfriend. There, Felix meets Feigi, a chicken who was constantly threatened by Pewdiepie. At one point Felix jumps off his new tower with Feigi on a leash. Pewds found a message on the ground made of Netherrrack that says "I love you" as he flew down. At night, Feigi finally touched the ground after jumping off with Felix. Felix felt sorry and gives Feigi a diamond, which turns him into Boss Feigi. Felix avoided the flying Steves and managed to kill Feigi. 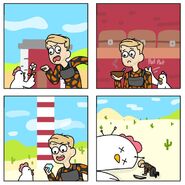 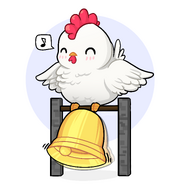 Feigi enjoying his favorite tune (Avi3te)
Add a photo to this gallery
Retrieved from "https://pewdiepie.fandom.com/wiki/Feigi?oldid=74238"
Community content is available under CC-BY-SA unless otherwise noted.