IKEA Bird is PewDiePie's second pet bird that was first seen in Part 19. He was tamed after the original IKEA Bird, Klaus, was accidentally killed by Pewds while he fought zombies off-camera.

He is a light-blue parrot with yellow and green markings, based on the look of a Blue and Gold Macaw.

In part 21, Felix trapped him under his base with wooden planks once he found the "real" IKEA Bird, IKEA Bird 2. He soon escaped and became a new DJ.

Felix came across two Pillagers that had been stuck in a boat. He killed one, but the other escaped. Felix attempted to retreat and dodge the arrows, but the Pillager fired an arrow directly into IKEA Bird, killing him instantly, but his death was not in vain, as he heroically gave his life to save Ikea Bird 2 and DJ Cow. The Pillager attempted to escape on the minecart leading to the Japanese house, the Pillager again tried to go back to Felix's base and escape but Felix caught up to him and took revenge by slaughtering him with a diamond axe, successfully avenged for his bird's sacrifice.

Ikea Bird 1 in all its Glory (https://www.reddit.com/r/PewdiepieSubmissions/comments/cgg1iw/ikea_bird_took_8_hours_totally_worth_it_greetings/) 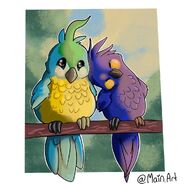 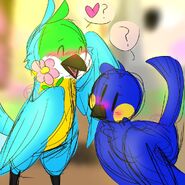 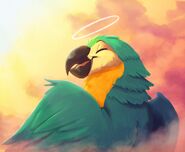 F for Ikea Bird (https://www.reddit.com/r/PewdiepieSubmissions/comments/clvoy4/you_were_the_best_bird_ikea_bird_we_will_miss_you/)
Add a photo to this gallery
Retrieved from "https://pewdiepie.fandom.com/wiki/IKEA_BIRD?oldid=74457"
Community content is available under CC-BY-SA unless otherwise noted.