Joergen was originally discovered in the first episode Minecraft Part 1 as a foal, but was tamed in Part 3.

Joergen #1 was known for going missing whenever Felix left him behind to explore an area; the first incidents of this occurred in Part 4. However it was revealed in Part 5, that this is just a glitch, and can be fixed by reloading the world after saving. In Part 5, Joergen was equipped with the Leather Horse Armor.

In Part 5, while PewDiePie was attempting to leave the Nether while riding Joergen #1 through a portal, #1 suddenly disappeared through the portal, glitching into the edge of the portal on the other side. Joergen, unfortunately, suffocated to death as a result.

The 9-year olds later regretted making Pewds sleep in the Nether and telling him that he can bring Joergen there. They promised to only give Pewds useful facts from then on.

Directly after the death of Joergen, PewDiePie built a grave for him made out of grey wool, with flowers and an item frame on the grave.

Joergen #1 was then promptly replaced by Joergen #2.

PewDiePie also planted two oak saplings in the field outside his house, with the intention to plant many more. However, somewhere in his future episode, he cut down the tree without realizing. it wasn't until he reacted to a meme on LWIAY that he realized he had cut down the tree and immediately logged back into the server and re-planted the tree.

Felix constantly drops melons on the grave to pay respects to the fallen hero.

In between Episode 8 and Episode 9, his grave tone was replaced with a golden one and at the end of Episode 11, gold from the underwater temple was added around the grave.

In Part 25, Pewds dedicated the IKEA Tower to Joergen, Joergen #2 and Water Sheep. Later, the three were dedicated to the new IKEA Tower.

Note: Joergen #1 had not been given a voice, so the following are quotes of PewDiePie talking to, or about him.

Joergen #1 in his stable. 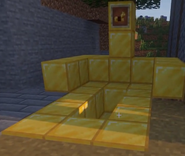 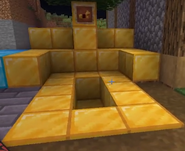 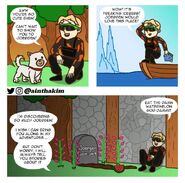 Add a photo to this gallery

Retrieved from "https://pewdiepie.fandom.com/wiki/Joergen?oldid=74906"
Community content is available under CC-BY-SA unless otherwise noted.