Joergen Smoergen II is the former deuteragonist of the YouTube series "MINECRAFT EPIC" and was the brother and successor of the original Joergen . He was introduced alongside Joergen in the first episode, but wasn't tamed until Episode Five, shortly after his brother's death. He was formerly one of the main characters of the series, alongside Pewds and Sven, following the death of Water Sheep. He went missing following after a raid of a Water Temple, but was later found by Felix in a later video (Part 16). He later suffocated after being placed in a 1 block wide Minecart track.

He is a fully bay-colored horse with white markings only on his lower legs.

One notable aspect about #2 is that he has 13 health points, while #1 only has 10. He was equipped with the Diamond Horse Armor, which was found in Part 6 (in addition to Iron Armor).

After crafting an anvil in Part 7, PewDiePie used the Name Tag on Joergen to name him "Joergen #2".

At the end of Part 19, Felix discovered that Horses are able to ride in Minecarts after Joergen entered the minecart leading to the Japanese house. After a brief ride to the Japanese house and back, Felix got curious and wanted to see if Joergen could ride the underground minecart as well. Felix brought Joergen to the railway via a leash and placed him in a minecart, but as soon as Joergen entered the cart he began suffocating, as horses can not ride down mineshafts that are one block wide. Before Felix could react, Joergen began speeding down the railway, unable to breathe. Felix, with the help of Sven, rushed down to try and help him, however after reaching the bottom Joergen somehow changed direction and sped back up to the top. By the time Felix and Sven reached the top where it all started, Joergen had died of suffocation. Felix ran over the minecart in which Joergen was and before he could even realise he was gone, he collected Joergen's Saddle and Diamond Armor. Felix ended the episode speechless, holding back tears as the episode went to black.

Joergen #2 would not be forgotten due to the massive impact he had on Felix's Minecraft series. Felix remarks numerous times after his death how he misses Joergen (as well as his predecessor) greatly, and how he will never find a horse like Joergen again.

After Joergen's death, Felix becomes ashamed of himself for killing two horses and feels he no longer deserves a horse as a steed. This leads to him taming a Donkey (which also died) and later, a Pig (which died as well) to use as steeds.

In Part 20, an episode after Joergen #2's death, Felix built a grave for him to the left of Joergen 1. He used all the diamonds in his collection to build diamond blocks to use for Joergens grave, stating that Joergen deserved it. However, Felix soon found he did not have enough diamond blocks to make a proper grave like his predecessor's, so he substituted the missing blocks by using light blue wool, promising to finish Joergens grave in the future. He promptly tossed melon slices onto his grave and Joergen #1's grave as a memorial.

In Part 21, Felix realised he did not have a proper dedication to Joergen other than his grave after fans pointed out that he gave Water Sheep a church after his death and Joergen received nothing of the sort. Felix built a massive statue of a knight (representing Felix) riding a horse (representing Joergen) that was reared up on its back legs as a memorial for his beloved steed. Fans soon informed Felix that the statue looked more like a kangaroo than a horse, and so Felix made some adjustments to the statue in Episode 22. He later stripped down all the graves to make a villager breeding farm, which he used for turning the Peepee Poopoo Army into zombie pigmen to kill the wither and make a beacon in Ikea Tower with item frames containing their armors.

Note: Joergen #2 had not been given a voice, so the following are quotes of PewDiePie talking to, or about him.

Joergen #2 in the Leather Horse Armor. 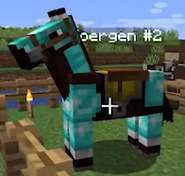 Joergen #2 in the Diamond Horse Armor.

The death of Joergen #2. 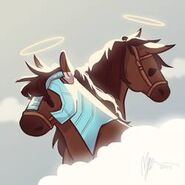 Joergen 2, along with Joergen 1
Add a photo to this gallery

Retrieved from "https://pewdiepie.fandom.com/wiki/Joergen_2?oldid=75524"
Community content is available under CC-BY-SA unless otherwise noted.