Queen PeePee PooPoo (AKA PeePeePooPoo #5) was the fifth and probably last pig to carry on the legacy of the legendary PeePee PooPoo #1, He's also one of two secondary antagonists in Season 1.

King PeePee PooPoo is first found in the part 29, he's given a saddle of PeePee PooPoo, due to PewDiePack, he was also given a crown, PewDiePie rode King PeePee PooPoo to the End portal through the Nether, but when they finally arrived, and Felix was mentally preparing, King PeePee PooPoo pushed him to the portal unprepared, officially betraying him. Pewds tried to fight the dragon but was unsuccessful.

After his death during The End Battle in episode 30, Felix returned and as an act of revenge, pushed PeePee PooPoo into the portal before jumping in himself trapping both in the End. After entering the End, Ender Dragon shot a projectile on Pewds and PeePee PooPoo, Pewds escaped, but PeePee PooPoo didn't. Felix thought that he died, but like a miracle Queen PeePee PooPoo survived the blast.

Felix then attempted to ride him to battle but he didn't realize that King PeePee PooPoo didn't have a saddle on him, so he stepped from the ledge, he got his own montage, that included all PeePee PooPoo's, that probably means an ending for all PeePee PooPoo's and their legacy, the two share one last look, before PeePee PooPoo perishes, and turns into the fog.

His death probably also marks the end of PeePee PooPoos.

In Felix's fever dream episode, he rencounters PeePee PooPoo, who Pewds shames for hisactions. He then unsuccessfully attempts to push PeePee PooPoo in the portal before riding him. PeePee PooPoo then almost rides into lava, possibly as a final attempt to kill him. After more attempts at pushing him in, he finally succeeds and jumps in afterwards, hitting PeePee PooPoo immediately upon entering the End. Pewds apologizes to the pig, saying he just jumped, before pushing PeePee PooPoo into the void, saying ending him forever. 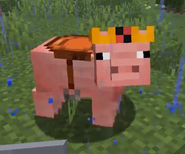 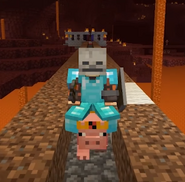 PewDiePie (possibly) mentally preparing to jump in The End shortly before King PeePee PooPoo pushes him in, betraying him and forcing him to fight ender Dragon unprepared
Add a photo to this gallery

riding to the end portal
Add a photo to this gallery
Retrieved from "https://pewdiepie.fandom.com/wiki/King_PeePee_PooPoo?oldid=74196"
Community content is available under CC-BY-SA unless otherwise noted.