MINECRAFT EPIC, also known as Minecraft The Series or Gaming Week, is a YouTube series featuring PewDiePie playing the sandbox video game Minecraft. Since its release, the series has received lots of popularity and most of his new videos are ranked as #1 on Gaming.

The Minecraft world in which the series takes place in is titled Broland. With 38 canonical episodes taking place in Broland, the series has gained in total over 280 million views on YouTube. Throughout his Minecraft lets play, he becomes increasingly more hooked to the game, and soon dedicates Gaming Week to Minecraft.

He has built various structures in Broland such as The IKEA Tower, Giant Meatball, Water Sheep Church, a Japanese summer house and a Joergen Statue. He has befriended many characters including his dog Sven, horse Joergen, Dinnerbone, Water Sheep, parrots IKEA BIRD and Klaus, and pig PeePee PooPoo. Dinnerbone is so far the longest surviving member of the Broland Gang.

Several times per week Pewds releases "non-canon" spinoffs with other bloggers, like Marzia, Jacksepticeye or CinnamonToastKen and a live-stream with Jack Black, as well as Minecraft Hunger Games with James Charles.

In late October, he stated in one of his Reddit videos that he lost his Minecraft Save file and he had to use a backup one. It is unknown when this backup file is set in, so he may reincarnate characters by going back in time.

On November 1, 2019, PewDiePie opened up on of his Reddit reviews as a trip in Canada, and he announced that he had been making the same videos and wanted to make Minecraft videos, so even though Sven presumably died, PewDiePie wants to carry on playing Minecraft.

The Floor is Lava with CinnamonToastKen

Fan art of Pewds with Sven, Joergen and Ikea bird
Add a photo to this gallery 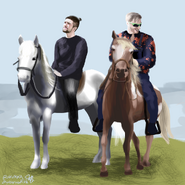 Fan art of Pewds with Joergen 2 and Sven (pidgeon_69)

The squad in the beginning. (https://www.reddit.com/r/PewdiepieSubmissions/comments/cb9wny/joergen_and_the_boys_20_hours_zoom_for_no_details/) 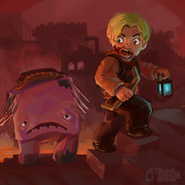 Protect ALL Striders! (https://www.reddit.com/r/PewdiepieSubmissions/comments/g85z7n/felix_im_cold_shutttp_youre_ugly_you_have_no/)
Add a photo to this gallery

Retrieved from "https://pewdiepie.fandom.com/wiki/MINECRAFT_EPIC?oldid=75838"
Community content is available under CC-BY-SA unless otherwise noted.