Minecraft is sandbox indie video game that was developed and published by Mojang. It was released on May 17th, 2009 as an alpha version and on November 18th, 2011 as a full version on pc.

PewDiePie did a Co-op Let's Play with Xebaz on Minecraft that consisted of 4 episodes, starting on December 17th, 2010 and ended on December 21st, 2010, though on rare occasions PewDiePie does secret live streams with Xebaz that were never uploaded to his channel.

His first recorded video that is now missing WAS Minecraft as stated in MINECRAFT EPIC Part 13, however his actual first video that he published on his channel was playing COD (Call Of Duty). His oldest video that is public is Minecraft Multiplayer Fun.

On February 17, 2019, PewDiePie played Minecraft in order to combat T-Series during the Great Subscriber War.

On June 22, 2019, PewDiePie revisited Minecraft as part of his "Gaming Week" series, going by the username sub2pewdiepie12. Since its release, the series has received lots of popularity and most of his new videos are ranked as #1 on Gaming. As of July 31, 2019, he uploaded almost 9.5 hours (±564 minutes) of him playing in his single player survival world.

He created the world Broland which features the famous IKEA tower, Giant Meatball, and Water Sheep Church. Also he has befriended many characters including his dog Sven, horse Joergen, Water Sheep, donkey Bernie and parrot Ikea Bird a.k.a Klaus.

He has also played with various other Youtubers such as CinnamonToastKen, James Charles, Jack Black, and Jacksepticeye.

Minecraft is an open world game that has no specific goals for the player to accomplish, allowing players a large amount of freedom in choosing how to play the game. However, there is an optional achievement system. The gameplay by default is first person, but players have the option to play in third person mode. The core gameplay revolves around breaking and placing blocks. The game world is essentially composed of rough 3D objects—mainly cubes—that are arranged in a fixed grid pattern and represent different materials, such as dirt, stone, various ores, water, and tree trunks. While players can move freely across the world, objects and items can only be placed at fixed locations relative to the grid. Players can gather these material blocks and place them elsewhere, thus allowing for various constructions. The game primarily consists of two game modes: Survival and Creative. Unlike in Survival Mode, in Creative Mode, players have access to unlimited blocks, regenerate health when damaged, and can fly freely around the world. The game also has a changeable difficulty system of four levels; the easiest difficulty (peaceful) removes any hostile creatures that spawn. A few of the hostile mobs in Minecraft are the Zombie, Spider, Enderman, Skeleton, and the iconic Creeper.

At the start of the game, the player is placed on the surface of a procedurally generated and virtually infinite game world. Players can walk across the terrain consisting of plains, mountains, forests, caves, and various water bodies. The world is divided into biomes ranging from deserts to jungles to snowfields. The in-game time system follows a day and night cycle, with one full cycle lasting 20 real time minutes. Throughout the course of the game, players encounter various non-player characters known as mobs, including animals, villagers and hostile creatures. During the daytime, non-hostile animals, such as cows, pigs, and chickens, spawn. They may be hunted for food and crafting materials. During night and in dark areas like caverns, hostile mobs, such as large spiders, skeletons, and zombies spawn. Some Minecraft-exclusive creatures have been noted by reviewers, such as the Creeper, an exploding creature that sneaks up on the player, and the Enderman, a creature with the ability to teleport and pick up blocks. 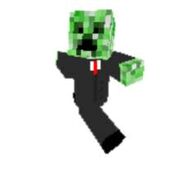 This was the skin PewDiePie used in the original series, a humanoid Creeper in a suit. 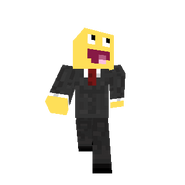 This was Xebaz's skin in the original series, the Awesome Face wearing a suit. 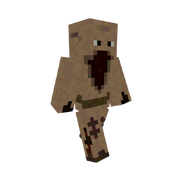 PewDiePie's skin prior to his 2019 series, The Bro. 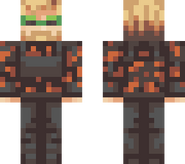 PewDiePie's current skin (as of June 2019), himself in his outfit from Congratulations.
Add a photo to this gallery


Cite error: <ref> tags exist for a group named "lower-alpha", but no corresponding <references group="lower-alpha"/> tag was found.
Retrieved from "https://pewdiepie.fandom.com/wiki/Minecraft?oldid=75579"
Community content is available under CC-BY-SA unless otherwise noted.