Mr. Chair (also known as Mr. Stol or Herr Stol in the Amnesia Custom Story Redemption ) is a chair that often appears as an oriental chair with green satin covering it, although sometimes the satin will be red or he. will be entirely wooden. Generally, every chair in every game is considered "Mr Chair", depending on whether or not PewDiePie acknowledges him. He was christened by PewDiePie in 2011, during the playthrough of Ao Oni.

Mr Chair's birthday is on July 2 (as stated in "Slender Man Horror Game," posted July 2, 2012). He has a thick accent and will often greet PewDiePie with enthusiasm. When a jumpscare during a playthrough happens in the vicinity of Mr Chair, said chair will apologize profusely and deny all accusations of the cause for the scare. During these wild apologies, he will attempt to shift the blame onto something else in the room (most commonly; the barrels).

One of his more interesting habits is getting jealous, often because PewDiePie decides to take Stephano with him instead of him. Also, whenever there is an enemy near or in the room, he will tell PewDiePie to activate "ChairMode" and then make a booping noise, in which PewDiePie is meant to crouch and stay still. The most well-known Mr. Chair currently resides in the Brennenburg Castle. PewDiePie actually found out that Mr. Chair is on Ecstasy in Amnesia: Custom Story: The Small Horse: Part C. Mr Chair also apparently does not like PewDie to spin him, as said in SNAPPY SNU! - Amnesia: Custom Story - Part 1 - Lost The Lights (+BONUS) .

PewDiePie does not appear to know that Mr. Chair is one of the most protective bros and will save him at all costs, even risking his own Chair life. PewDiePie sometimes overlooks it, but most times, he thanks M. Chair for his protection. While M. Chair may be an asset to PewDiePie as a protector, he does not know much, so he is unable to help with any intelligent task. PewDiePie is not bothered by this and still treats Mr. Chair like a part of the Bro Army.

In the Sims 3 playthrough, PewDiePie created a baby character and named it Mr. Chair. The real M. Chair has many identical relatives, a cousin named Jence, and a mother named Berta.

Mr. Chair is the inventor of the "ChairMode," a form of camouflage that seemingly protects him from monsters. To enter ChairMode, M. Chair will proclaim loudly, "Chair Mode activate!" then drop to the floor. A "boop" noise follows the famous shout. In the game Ao Oni, "ChairMode" is simply running to the other side of the chair from where the Ao Oni is at.

DJ Fortify's "ChairMode" was also used in the outro of PewDiePie's videos.

Mr. Chair often makes appearances in various games that PewDiePie plays. Whenever PewDiePie sees any chair, regardless of the game he is playing, he will greet the chair as "Mr. Chair."

The three most common variations of Mr. Chair in Amnesia: The Dark Descent. 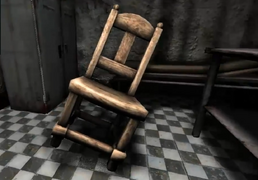 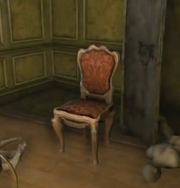 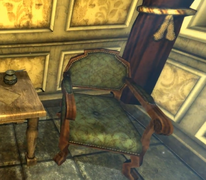 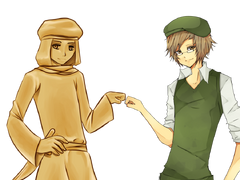 Mr. Chair depicted as a human, along with Stephano
Add a photo to this gallery
Retrieved from "https://pewdiepie.fandom.com/wiki/Mr._Chair?oldid=76097"
Community content is available under CC-BY-SA unless otherwise noted.