PeePeePooPoo was a pig tamed by Pewds in Episode 20 of his Minecraft series MINECRAFT EPIC.

PeePeePooPoo was his new steed after Bernie the Donkey passed.

Felix, stricken with guilt after the death of Bernie and his other pets, decided that he didn't deserve a horse or donkey to ride. He decided instead to ride a pig that he found and named the pig PeePeePooPoo.

With the help of PeePee PooPoo, Felix was able to kill a group of pillagers who attacked the house. Still filled with sadness over the death of his pets, he decided to go on a pilgrimage riding PeePeePooPoo

As he continued on his journey with Felix, many pigs began to join the pilgrimage leading to a small army of pigs following PeePeePooPoo.

Once he returned from the pilgrimage, Pewds led the pigs (the PeePeePooPoo army) to a pen with PeePeePooPoo with them.

He also dreams of jumping like a dolphin, but according to PewDiePie he couldn't become one even if he lost weight.

After Felix wanted to ride PeePeePooPoo out of the pen with his pig army inside, he got increasingly agitated by the other pigs pushing him around, and in retaliation, began punching many of them; he accidentally hit PeePeePooPoo numerous times and after leaving the pen with him, Felix noticed that PeePeePooPoo was nearly dead and only had half a heart worth of health left. Desperate to heal his pig, Felix rushed home and made a Splash Potion of Healing, however when he returned to PeePee PooPoo with it he soon realised he did not know how to use it. While attempting to use the potion, Felix accidentally and fatally punched PeePeePooPoo again, this time draining his last half a heart and instantly killing him. He will be remembered.

PeePeePooPoo was later seen in the boat, with Felix saying that he has two lives, although this was possibly a replacement. The new Pig was given the name "PeePee TwoPoo" by Felix.

In keeping his promise of bringing a PeePee PooPoo in battling the Ender Dragon, Felix brought the King of the fallen army. He became notorious for pushing Felix into the End Portal, forcing him to fight the Ender Dragon by himself. The King joined the battle but died along with Felix when they accidentally went off a bridge.

Note: PeePee PooPoo had not been given a voice, so the following are quotes of PewDiePie talking to, or about him. 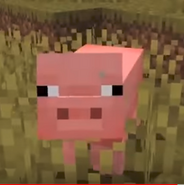 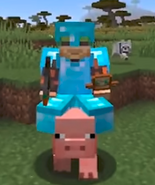 Pewds riding PeePee PooPoo with sven in the background.

PeePee PooPoo stuck in the door

Community content is available under CC-BY-SA unless otherwise noted.
Advertisement