Wolfdog
Sven Svenson is the name of a wolfish dog and founding member of the Sven Family that PewDiePie had tamed in his Minecraft "Gaming Week" series MINECRAFT EPIC, which started in June 2019 and the tritagonist turned deuteragonist of the series since Episode 20 since previous deuteragonist Joergen #2 died at the end of Episode 19. He is currently the second-longest living character in the series, beaten only by Llama Guy #1.

PewDiePie has stated that if Sven dies, the Minecraft Series end.

Sven was first found in Part 7 when PewDiePie explored the new area that was on the other side of his second Nether Portal. He was fed meat and later tamed with a bone from a Skeleton. His collar was changed from red (default) to blue in Part 9.

In Part 9, Pewds brings Sven on an adventure together with Joergen 2. When he rides the boat over a ravine during the trip back home, the boat sinks after getting pulled underwater by Magma Blocks. Sven gets brought down in an underwater cave and gets stuck. This is noted for making Felix almost cry in the series. Sven is also referred to as "Joergen" in this episode because losing Sven was similar to Joergen's tragic death.

In Part 10 of the Minecraft series, Sven is rescued by Felix when he returned to the cave where Sven was trapped and saved him by attaching a leash and swimming up to the boat for safety. Sven was gifted multiple "Scooby Snacks" in the form of rotten flesh. After arriving at the base, PewDiePie accidentally hit Sven with an Axe, and immediately started apologizing to him.

In Part 14, PewDiePie dedicates the Japanese house, which he built in the previous episode, to Sven as a doghouse.

In Part 15, Pewds took Sven on a long adventure to the Woodland Mansion (due to the absence of Joergen #2), and obtains lots of "epic gamer loot".

In Part 16, Sven is shown the newly completed Giant Meatball and fails to ride the elevator. Later, Sven attends Water Sheep's funeral and then goes looking for Joergen #2 and Dinnerbone.

In Part 20, Sven entered the Nether occasionally, and Pewds saved him by bringing back into the normal world.

In Part 21, Sven became the new DJ for a bit until getting replaced by Ikea Bird.

In Part 26, Sven was taken to see the now cleared water temple with Pewds.

In Part 27, Sven went on an expedition with Pewdiepie to a taiga biome, where they first met Bengt and Sven's BF. Afterwards, Sven was married to his boyfriend and they had a baby together.

In Part 28, Sven almost gets exploded by creepers on multiple occasions throughout the tense episode. This episode is notable, as Pewdiepie clickbaited the title and thumbnail, making it seem like Sven was killed during the episode.

In Part 29, Sven fought bravely against pillagers in the raid on Broland and was nearly killed. Afterward, PewDiePie thanked Sven, telling him ¨You were the best of all of us.¨

In Part 30, Pewds went to fight the Ender Dragon, he left Sven at home. However, Pewds still dubs Sven a hero.

In Part 32 Sven's BF died due to the 'bouncing machine', (a slime block bouncer), causing Sven to banish PewDiePie from the farm.

In Part 33, Pewds returned and he was forgiven by Sven.

In Part 35, it is revealed that he, his son, Bengt and Joergen #3 were hiding under Ikea Tower, which PewDiePie was about to blow up, meaning he would have killed them. Then, The Council of Beet blew it up. Joergen 3, Bengt and Svenson died.

In Part 36, Sven was reincarnated along with his friends by PewDiePie going to an old save file and he celebrated his 30th birthday.

In Part 38, PewDiePie's Minecraft House went up in flames, and Sven got caught on fire.

In Part 40, He appears to be traumatized by making a baby with his son, DEEEP. He watches Felix destroy the church and the Council of Water Sheep, but asks Felix to bring his son, Alabama, back.

Sven was married to Sven's BF in Part 27 by Felix. Dark Joergen, Virgin Turtle, Bengt, a random pig which Felix called PeePee PooPoo, Ulla Britta and the fellow cats attended the wedding. After Felix says "You may now kiss your husband", he fed both of them cooked porkchop which made them produce Svenson.

Later on, Sven's BF was tragically killed by PewDiePie's "bouncing pad", and PewDiePie had to tell Sven the tragic news. Sven banished Pewds from their household as a result, which also caused him to leave Broland. When Felix returned, Sven forgave him.

Later, Sven had a child with his own son, Svenson (now named DEEEP), in episode 39. Felix forgot Svenson was Sven's son.

The inbred child was named, Alabama. Even though fricking with DEEEP traumatized Sven, he still loved Alabama, and asked Felix to spare him.

"Now go in, mate! Go on!" (PewDiePie attempting to get Sven into his temporary hut)

"I'll leave him with apple, and water. He'll be just fine. I'll be right back" (Pewds leaving Sven)

"I need to bring you back home! Joergen is gonna see you!"

"Go, doggy! Get 'em!" (Pewds when Sven is attacking a skeleton)

"*beatboxing*" (Pewds when Sven repeatedly sits and stands, his way of dancing)

"Sven is on the attack!"

"Did you hear that Sven? I think we're getting close to the treasure. But my god we're far from home"

"Now what am I gonna do with that gold, you might ask, Sven? Well, It's for an old friend." (Pewds before upgrading Joergen's grave)

"Sven, it was epic. I found this castle, and I raided it, and we got a lotta gamer loot. Like, they're gonna be so so pissed- Sven! Get down from there! Get down from there, right now. Sven! You do not- Oh god..." (Felix after Sven goes up above the lava)

Sven trapped in an underwater cave.

Sven and his boyfriend 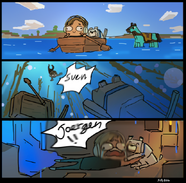 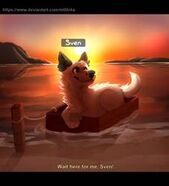 Sven being stuck in an underwater cave 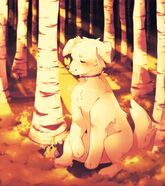 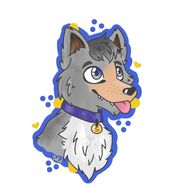 Sven in his throne 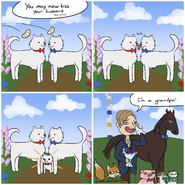 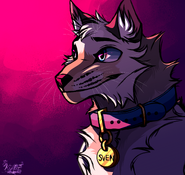 Sven in the forest with Ake and Bengt

Sven and DEEEP using a Trebuchet to YEET their incest child. (https://www.reddit.com/r/PewdiepieSubmissions/comments/fgba4p/whys_it_not_going/)

"In the bing bong, there's a pling plong, but what is a pling plong?" (https://www.reddit.com/r/PewdiepieSubmissions/comments/fg8tqq/my_friend_made_this_after_seeing_pewds_video_with/)
Community content is available under CC-BY-SA unless otherwise noted.