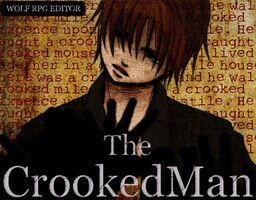 The Crooked Man is a free-ware horror adventure video game that was developed by Uri using WOLF RPG Editor. It was translated into English by vgperson.

David Hoover, with the help of his friends Paul and Marion, moves into a new apartment during a rough period in his life. The first night, he hears the voice of a man sobbing, and after finding a scrap of paper under his bed, strange messages begin to appear to him. He tries to find information about the former tenant of the apartment, but nothing turns up. Compelled and drawn to the mystery of who the man is, David sets off to an unknown destination to find him.

Retrieved from "https://pewdiepie.fandom.com/wiki/The_Crooked_Man_(game)?oldid=39329"
Community content is available under CC-BY-SA unless otherwise noted.