Manager Ulla Britta Smitta Fitta, best known simply as Ulla Britta is a calico cat that was tamed in PewDiePie's 2019 series MINECRAFT EPIC. She has white fur and black and orange stains, her right eye color is yellow and blue for her left eye. She has a Masters Degree in Engineering and became the Manager of the Ranch and the Fricking Chamber in ep.40.

Ulla Britta was first seen at the end of PewDiePie's 24th episode "I found the LIGHTNING TRIDENT in Minecraft!"

At the end of Part 24, Pewds spotted a calico cat wandering into the open Water-Sheep Face. Still wanting a cat, Pewds followed her with some raw cod. When she stopped between some villagers in the Fricking Chamber, Pewds successfully tamed her with a single raw cod. Pewds then dyed her collar yellow and officially named her Ulla Britta with a name tag. Pewds then brought her out of the Fricking Chamber and introduced her to Sven.

In Part 25, Pewds reveals that he tamed two of Ulla Britta's relatives (And that he doesn't know what to name them.) Later, after The Wither is defeated, he informs her that he got a Nether Star from it. While Pewds deconstructed Joergen's grave to retrofit the gold blocks to Ikea Tower, Ulla Britta accused him of desecrating Joergen. (At least he thought she was, even though she was just meowing.) Pewds simply told her he didn't need judgment from someone with her name.

In Part 27, Ulla Britta and the other two cats were witnesses to Pewds accidentally killing DJ COW and IKEA BIRD #2 due to a false claim from fans. Pewds told all three cats to not look at him. Ulla Britta didn't listen, so Pewds put her in a time out. A little while later, Pewds found her in a hole next to the Broland DJ Station where DJ COW used to live. Pewds decided her time out was over and brought her out with a leash. He started apologizing to her for getting mad, but it was cut short when he spotted a zombie where one of his farmer villagers should be. Pewds then asked Ulla Britta what color light she preferred for the beacon in Ikea Tower. She picked yellow, but Sven wanted blue. After extensive trial and error, Pewds ultimately came up with another brilliant Redstone contraption as he figured out a way to do both. Once it was complete, Pewds went back to Ulla Britta and said she was crying at the sight of it. (Even though she wasn't.) It was only then that he noticed her eyes were the colors of Joergen and Joergen 2's graves, leading him to believe there was a hidden meaning behind it. Later, Pewds realized he never really discovered forest areas. After retrieving Dark Joergen, Pewds said goodbye to Ulla Britta as they, along with Sven, rode off on another epic adventure. Several Minecraft days later, Pewds returned home and introduced Ulla Britta to Bengt. As Pewds went to bed, Ulla Britta slept on the bed with him, hinting that she missed him while he was away. She then attends Sven's wedding along with Bengt, Virgin Toad, Dark Joergen, Unnamed Cat 2, and a random pig and witnesses the birth of Svenson.

In Part 28, after Pewds obtained a skeleton head and wore it like a helmet, he decided to scare Sven with it. Pewds stopped to tell Ulla Britta that the man with the skeleton head was him, but he also told her to not tell Sven it was him. At the end of the episode, Pewds brought Ulla Britta, Sven's BF, and Svenson over to Sven's Japanese House to watch fireworks he crafted go off in the night sky. All four pets loved the show.

In Part 32, Ulla Britta assists with Pewds development of a rail mechanism in order to allow him to launch himself into the sky. In this episode, she is painted as a little bit of a motherly figure, as she oversees the safety of Sven while he rides in a minecart and is revealed to be in charge of the Safety Department. It is also mentioned that she studied engineering. Ulla Britta refuses to go on a ride in a minecart herself; a wise choice considering the number of pets who have perished by taking part in Felix's mechanisms.

In Part 34, she was kidnapped by Council of Beet and was held hostage along with Joergen 3, Sven, DEEEP (aka Svenson), and Bengt behind the first Ikea Tower. 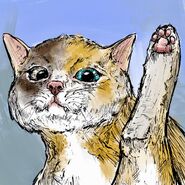 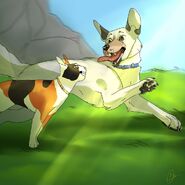 Sven and Ulla cheerfully play in an open 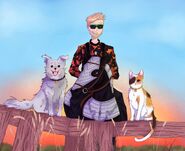 Ulla, along with Sven, Dark Joergen and Pewds 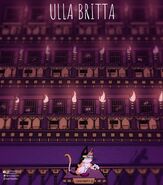 Guarding the Ranch
Add a photo to this gallery

Retrieved from "https://pewdiepie.fandom.com/wiki/Ulla_Britta?oldid=76820"
Community content is available under CC-BY-SA unless otherwise noted.